Warning: Parameter 2 to wp_hide_post_Public::query_posts_join() expected to be a reference, value given in /home/staging_localspins/www/wp-includes/class-wp-hook.php on line 286
 About Local Spins - Local Spins 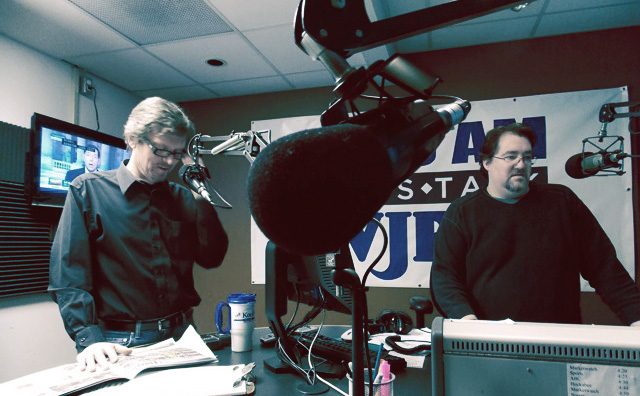 Keeping the spotlight on talented West Michigan bands and the burgeoning regional concert scene: That was John Sinkevics’ mission for years as lead music critic and entertainment writer for The Grand Rapids Press.

Now, as publisher of the Local Spins website, that’s continued with news updates on Grand Rapids-area musical happenings, concert listings, guest columns, photo galleries, videos, podcasts, concert and album reviews, playlists and weekly features on different artists — many of whom appear on radio on two different shows that he hosts:  Local Spins Live at 11 a.m. Wednesdays on News Talk 1340 AM and Local Spins on WYCE at 11 a.m. Fridays on WYCE 88.1 FM. 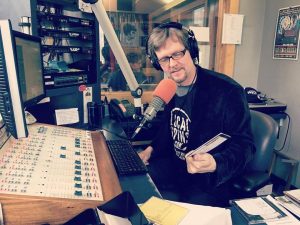 Sinkevics on the air at WYCE. (Photo/Anna Sink)

His work has been acknowledged by musicians, music lovers and radio listeners: Not only was the Grand Haven native honored by WYCE with a Legacy Award for his support of the music community, but he finished third in Revue Magazine’s 2016 “Best of the West” readers’ poll for favorite radio personality.

But the website also depends on a dedicated, talented staff of freelance writers and photographers who tirelessly provide coverage of bands, solo artists, concerts, festivals and more across West Michigan.

As part of its goal to spotlight local talent, Local Spins hosts a regional weekly concert series at SpeakEZ Lounge that showcases up-and-coming and veteran acts from across the region. The Local Spins Wednesdays series takes place at 8 p.m. every Wednesday in the intimate confines of this downtown restaurant, bar and music venue.

In addition, the website hosts regular HopCat presents Local Spins Live at River City Studios sessions where a variety of regional acts are interviewed and perform several songs in front of a small studio audience. Stories, videos and podcasts from those sessions are posted at Local Spins.

Readers can find a rundown of weekly concert offerings and “under-the-radar” picks in the Grand Rapids and Kalamazoo area in The Big List Concert Guide published on Mondays, with Local Spins reviews and in-depth features focusing attention on a host of important and eclectic Grand Rapids area bands and solo artists. Annual Local Spin of the Year awards have honored some of the region’s most talented acts, including Vox Vidorra, The Soil & The Sun, Dave Hardin, Drew Nelson, Ralston Bowles, Bless You Boys, The Crane Wives, The Fuzzrites, Simien the Whale and Ultraviolet Hippopotamus.

As a result, Local Spins has become the fastest-growing music website in West Michigan, with a growing audience of devoted readers. 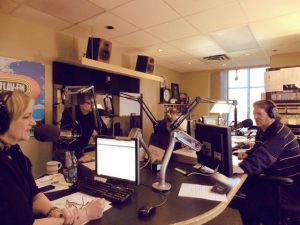 Stories and features focusing on West Michigan’s music scene also can be found regularly in The Holland Sentinel and Traverse City Record-Eagle.

All material at Spins on Music: Copyright 2012-2016 by John Sinkevics and Spins on Music LLC. (Not to be reused without permission … but we’re likely to give it to help spread the word!)